There are three orange blocks for this section, yesterday I posted the ‘birds in flight’ block and it’s significance. The two blocks today have no significance other than I wanted something simple.

Firstly, a nine patch made from Happy-go-Lucky candy squares by Bonnie and Camille for Moda. I bought these at The Quilters and Embroiderers Store, Brisbane. Camille Roskelly was giving a talk and I bought her book Simply Retro and a few packs of these candy squares. Loved her talk and the quilts she brought with her!

Secondly, another simple patch which I made up. I don’t think it is an old block, at least I couldn’t find it. I was trying to think of a name. As it is an easy variation of a nine patch I thought Easy Kate but that sounds like it is named after a strumpet ha ha. Kate in the corner sounds like a naughty child so I’ll leave it as a nine-patch variation which sounds boring but accurate 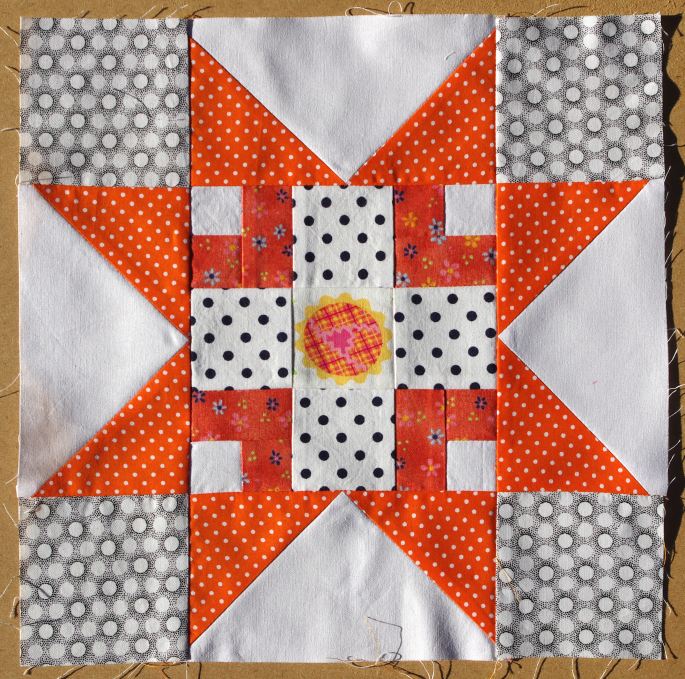 The little flower in the middle is from ‘Sweet Things’ by Holly Holderman for Lake House Dry Goods and has the  cutest colour chart on the selvedge of cupcakes instead of the usual dots. Another scrap from a scrap bag bought on EBay

7 thoughts on “A Couple of Oranges”

Quilting, Reading and the Movies